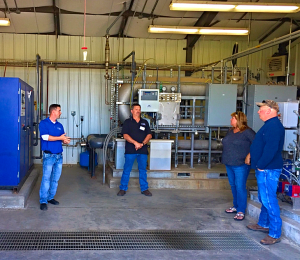 The tour featured a stop at the treatment facility that remediates groundwater contaminated with the solvent TCE. HGL representatives describe the operation of this facility.

The U.S. Army Corp of Engineers (USACE) Directorate of Environmental and Munitions Center of Expertise expressed thanks to HGL for its hospitality in supporting a tour of the various remediation systems at the Former Nebraska Ordnance Plant (NOP) on May 10, 2017. USACE specifically acknowledged HGL’s lead system operator as a “dynamic and very knowledgeable tour guide” and an “excellent system operator.” The tour group consisted of USACE employees participating in their internal Remediation Technologies course and, as noted by USACE, they were “very enthusiastic about their experiences on the tour.”

The May 10 tour was followed by an open house event on May 24. An open house is held on site semiannually to update local stakeholders on current site activities and progress related to the site cleanup. The event, as reported by The Ashland Gazette, was attended by representatives from the U.S. Environmental Protection Agency and the Nebraska Department of Environmental Quality in addition to local residents. HGL has been operating the treatment system at the Former NOP since 2014, and recently added a new extraction well to the hydraulic containment system as well as a pump house and a solar panel. In March, the Omaha Public Power District approved the connection of this newest solar array into its power grid so that it can purchase energy in excess of that required to operate the treatment system. The three solar arrays on the NOP site are expected to save $90,000 in energy costs over the next 10 years.