As indicated below, HGL’s capabilities and excellent performance on several projects have earned special recognition from clients and independent organizations. 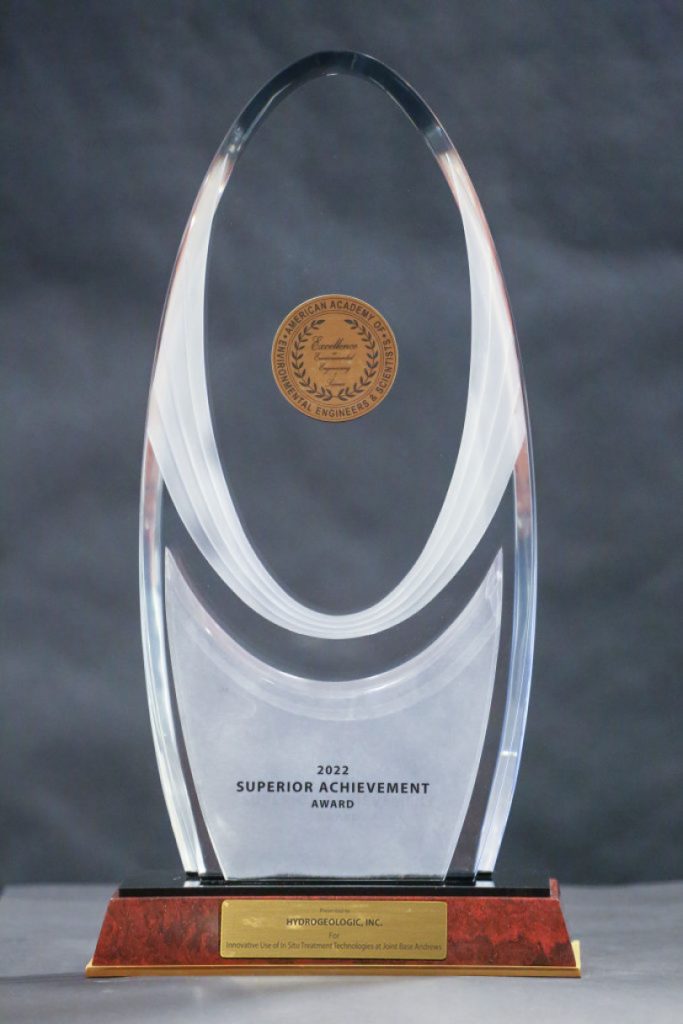 The project addressed a 21-acre trichloroethene (TCE) plume extending from the JBA-controlled former Brandywine Defense Reutilization and Marketing Office (DRMO) yard beneath active railroad tracks and a public road into an adjacent residential area. DoD used the DRMO site for storage from 1943 to 1987, and spills, leaks, and storage practices common to that era resulted in the release of solvents and fuels into the environment and ultimately to the placement of the site on the National Priorities List (NPL) in 1999.

HGL designed, constructed, and operated a groundwater extraction and treatment system to achieve hydraulic control of the dense nonaqueous phase liquid (DNAPL) source area. In addition, HGL designed and executed an extensive in situ enhanced reductive dechlorination remedy. By 2015, the entire plume beneath the residential area had been remediated to EPA Maximum Contaminant Levels.

To address residual sources of TCE and 1,4-dichlorobenzene (1,4-DCB), HGL oversaw the design, construction, and operation of the first in situ thermal treatment project ever completed under an active railway. HGL worked with CSX Transportation, the owner of the railway, to install electrodes within its right-of-way for the large-scale electrical resistance heating (ERH) system. ERH treatment reduced TCE levels by 97.2% and 1,4-DCB levels by 99.5%. Throughout the project, HGL managed communication among numerous stakeholders, fostering open communication and transparency. Owing to the success of the project, HGL was selected by the Design and Construction Issues at Hazardous Waste Sites (DCHWS) symposium committee to present its process and outcome as part of the April 2019 Successful Applications for Thermal Treatment panel.

HGL is proud of its project work and use of innovative in situ treatment technologies to remediate groundwater contamination in challenging environments such as the one at JBA.

Trophy Presentation by AAEES at HGL. 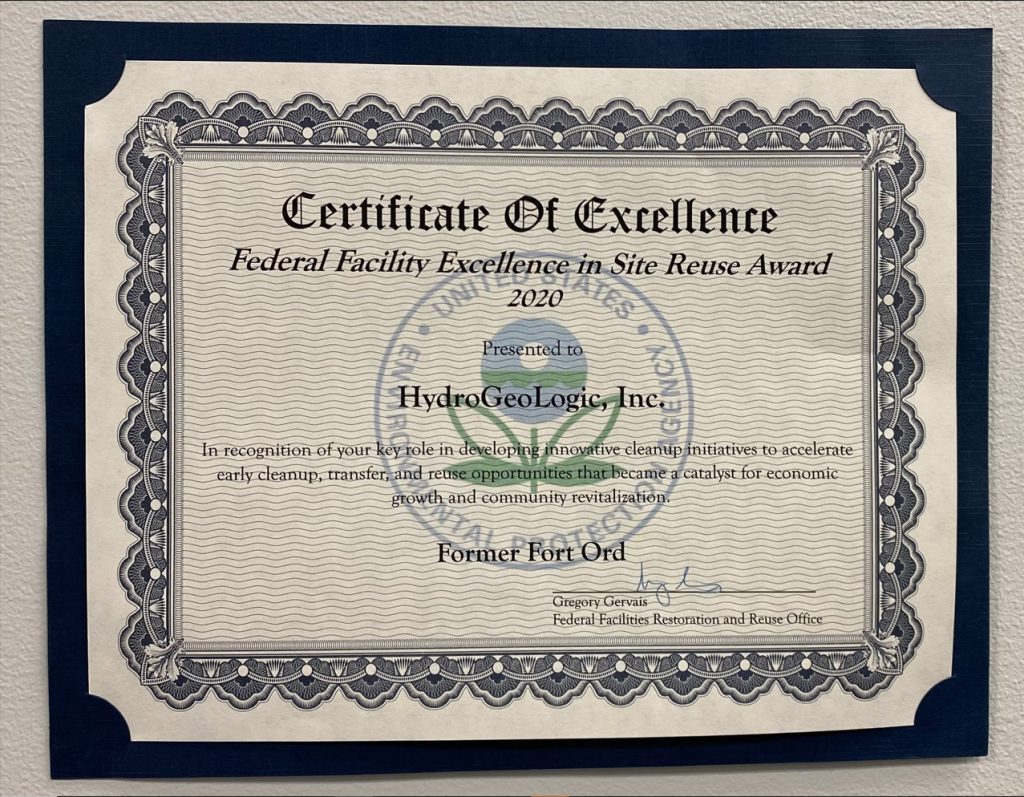 HGL recently received from the U.S. Environmental Protection Agency (EPA) the certificate for its Federal Facility Excellence in Site Reuse Award for its work at the former Fort Ord in California. The award was presented in 2020, but HGL did not receive the certificate for the award until September 2022 owing to COVID and other factors. The award was presented in recognition of HGL’s key role in developing innovative cleanup strategies to accelerate the cleanup, transfer, and reuse of the property. These reuse opportunities have helped stimulate economic growth in the area and have spurred the revitalization of the local community.
The innovative integrated approaches implemented by HGL minimized remediation costs and reduced the cleanup times for large portions of the former military installation. In particular, HGL optimized the design and operation of a groundwater remediation system, allowing the remedial goals for the site to be met 3 years before the date estimated in the Record of Decision (ROD).

CEO and President of HGL Peter Huyakorn, Ph.D., BCEE, said, ” We are honored to have received this recognition from EPA and to have contributed to the reuse of the property and the revitalization of the area surrounding the former Fort Ord.” 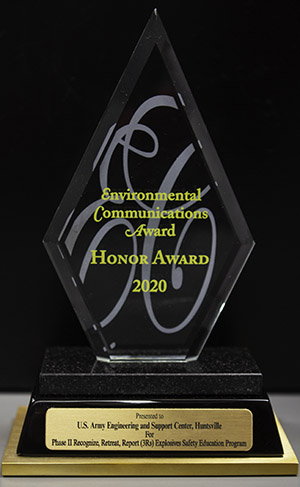 The 3Rs Program is a collaborative effort between the Deputy Assistant Secretary of the Army for Environment, Safety, and Occupational Health (DASA-ESOH), USAESCH, HGL, and participating installations to expand safety education and awareness concerning unexploded ordnance. USAESCH provides technical expertise, engineering solutions, and innovative approaches for addressing national environmental issues through centrally managed programs, such as the 3Rs Program. HGL has been supporting USAESCH directly for 10 years on munitions-related projects and has been providing community relations support to USAESCH and other clients for over 20 years.

Outreach events have been one of the most successful methods for bringing the 3Rs message to children and families. A prize wheel with 3Rs giveaways and games entertain children at the 3Rs outreach booth, while parents are engaged with a brief survey to build awareness of the dangers of unexploded ordnance. And when Sergeant Woof, the 3Rs Program mascot, arrives at the outreach booth, everyone wants a photo.

On April 13, 2017, HGL received a Grand Prize in the Research category of the Excellence in Environmental Engineering and Science™ competition for its Physics-Based Management Optimization (PBMO™) technology. The annual competition, organized AAEES, has been identifying and rewarding the best in current environmental engineering and science since 1989. PBMO™ is a cutting-edge computer software system capable of being run in the cloud environment that links calibrated groundwater flow and transport models with highly efficient optimization algorithms. HGL’s cloud-based PBMO™ runs exponentially faster than other available systems and can obtain optimal solutions in a practical amount of time, ranging from a few minutes for small problems to a day for very large problems. PBMO™ has provided optimized management solutions in support of a variety of environmental remediation and water resource projects. Benefits resulting from PBMO™ applications include a reduction of potential human-health risks, conservation of natural resources, significant cost savings, and timely attainment of cleanup goals. The breadth of opportunity for applying PBMO™ to challenging environmental and water resource management problems is immense. The more complex the problem, the more value PBMO™ provides in finding optimal solutions. 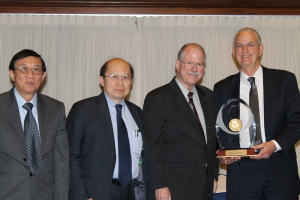 AAEES also awarded HGL a Grand Prize for its work on a highly complex environmental remediation project at the former Fort Ord. The award was received in the Small Projects category of the Excellence in Environmental Engineering and Science™ competition. Fort Ord is a former U.S. Army base encompassing more than 28,000 acres in Monterey County, California. Closed by Congress in 1994, the base has been undergoing cleanup with oversight by federal and state regulatory agencies. Fire training activities conducted at the installation released volatile organic compounds to groundwater in the area subsequently identified as Operable Unit 1 (OU-1). The 1995 OU-1 Record of Decision (ROD) identified 10 volatile organic compounds, including trichloroethene (TCE), total 1,2-dichloroethene, and benzene, as chemicals of concern (COCs). The TCE plume footprint encompassed the individual plumes of all 10 COCs. In December 2003, HGL was contracted by the U.S. Army Corps of Engineers to conduct a Performance-Based Remediation (PBR) with the objective of Site Closure. Remedial action objectives (RAOs) included restoring groundwater quality beneath 130 acres of the Fort Ord Natural Reserve (FONR) to cleanup goals identified in the ROD. HGL successfully implemented integrated approaches and remediated the site despite the discovery that the TCE plume had extended off site approximately 1,400 feet beyond the previously estimated limit. Other challenging constraints overcome by HGL included conserving FONR habitat and plant species and not affecting other contaminated areas of the site. Given the high probability that compounds containing emerging contaminants perfluorooctane sulfonate/perfluorooctanoic acid (PFOS/PFOA) were used in training activities, the regulators overseeing the cleanup required site-specific data to support the Army’s site closeout request. HGL developed a strategy to reach site closure that included attainment monitoring for the COCs and PFOS/PFOA along with follow-up criteria based on the Provisional Health Advisory. HGL achieved cleanup goals in 2014, three years before the 2017 date estimated in the ROD; completed attainment monitoring in 2015; and obtained remediation action completion concurrence from regulatory agencies in 2016.