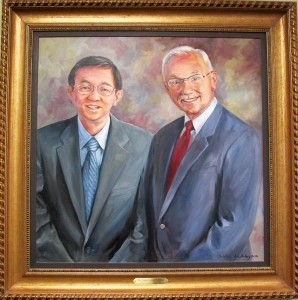 HydroGeoLogic, Inc. was founded in 1987 by Peter S. Huyakorn, Ph.D., BCEE and John “Jack” Robertson, PG, each who possessed an entrepreneurial spirit and love of science and technology.

Their first office located at 503 Carlyle Drive in Herndon, Virginia, was a small space that accommodated the founders, two geologists, an IT specialist, a field technician, and an administrator. It was from there, that the group supported HGL’s first contract performing modeling and software development for the EPA’s Office of Solid Waste, which remains a client to this day.

In 1990, Dr. Huyakorn officially became the company’s president, HGL was successful in its application for 8(a) status, and a decade of growth ensued. During this time, new business lines were launched and new clients such as AFCEC (formerly AFCEE), USACE, DOE, and state agencies were added. Later, in 1999, Mr. Robertson retired, but is still a consultant to HGL, often providing expert witness testimony.

After graduating the 8(a) program in 2000, normally a very challenging transition period for small businesses, Dr. Huyakorn and company successfully competed for and were awarded several major ID/IQ environmental remediation services contracts. Staff and revenues over the next decade increased substantially, as well as HGL’s reputation for excellent service and innovation.